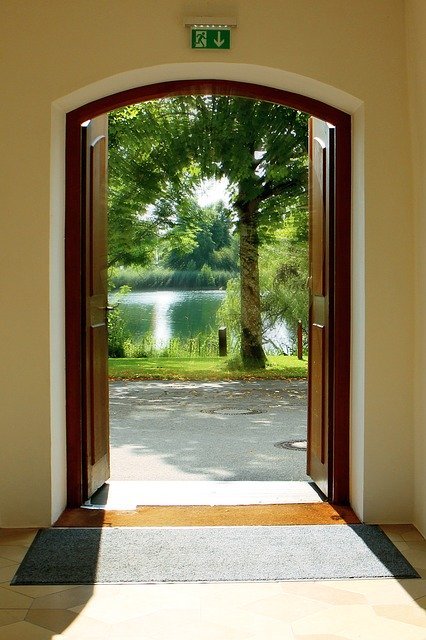 A door has opened to the Church

In the United States, we were told in March that we all needed to do was “stay home and stay safe.”  Even though the number of COVID 19 cases were few and the percentage of deaths were small, we were warned that this “invisible” virus was increasing quickly. So, unless we listened to infectious disease experts and political leaders, we could expect millions of deaths. The numbers predicted were to be as many, if not more than, the 1919 Spanish Flu Pandemic.   Every day we heard about how the hospitals were overwhelmed and soon there would not be enough ICU beds or ventilators to keep people alive.  We all learned new terms like “flattening the curve.”  If we listened, we could flatten the curve and get back to “normal.”  All of these guidelines were especially important if you were over 65 years old and had any underlying medical conditions like high blood pressure or immune deficiencies.  So, we all listened.  Soon what was a simple warning to be careful led to the shutting down of the United States’ economy.  Stores, restaurants, gyms, and all non-essential services were shut down.  The churches were included in that shutdown.

The Church was faced with how to continue the public worship of God, the administration of the sacraments, and the preaching of the Word. The ability to “live stream” on Facebook opened an opportunity we didn’t know we had available to us. Several churches had already been “live streaming,” and within a few weeks, they found that while there were people from their churches viewing the live stream, their viewing audience was often ten times, or more, larger than the membership of their Church. One Bishop began a morning devotion for his people, and soon, people from around the world were joining him for prayer and listening to his daily devotions. On occasion, he would have a thousand people viewing. One small church with an average attendance of fifty soon had over four hundred people viewing every Sunday.

Because of this, many churches increased their technology and changed their format to suit the medium.  Not only were Sunday services being broadcast on various social media outlets, but there were online Bible studies, support groups, home groups, and clergy doing mid-week reflections.  I have personally attended Bible studies and men’s groups online.  In doing so, I have listened to some great preachers and teachers.  I even started sharing my daily reflections on a Facebook live stream, which can be viewed live at 1.30 p.m. every day, but Sunday, or you can replay from my Facebook page – Craig Bates.

A door has opened to the Church that we didn’t expect. We now have the vehicle to evangelize. One of our churches now has a program where they can harvest the names of viewers and follow up with them. The same church has prayer rooms and counseling rooms that are available during the broadcasts. Several people have made a decision for Christ while watching a service, and the program gives the Church the opportunity to minister to them and to follow up.

I know we want to get back to public gatherings.  I want to see my church family in one place, and I want to receive communion without a mask.  We are told by the experts, however, as recently as today, that this pandemic will be with us for a while, perhaps into 2021.  There is some concern among experts that there may be a second wave or an increase in cases by opening too soon.  Already some states are pulling back and reinstating shut down guidelines because of an increase in the number of cases and hospitalizations.

But do we want to get back to normal?  I have believed from the beginning that this season was not a time of survival but revival.  Technology is not an enemy.  We have been given an opportunity through technology to increase the impact of ministry around the world.  I have already connected with our churches and people in Africa, Europe, and Asia.  I have preached via YouTube in churches while sitting in a chair in my living room.  The House of Bishops has been meeting for months via Zoom.  I can imagine hundreds of ways to increase visibility and bring the Gospel to the least, the lost, and the lonely.

Public worship will come back and we will get back to not wearing masks, even giving someone a hug will become an option once again. The exchanging of the peace will return. We will begin to fellowship around coffee and meals. And most importantly, we will be able to receive the Body and the Blood of Jesus in the bread and the common cup. We will come back together having expanded our outreach and effectiveness. I want to continue to listen to great sermons from other churches, to attend small groups, to listen to fantastic worship teams from around our communion, and to reach out and bring others to Christ.

Be patient.  The guidelines are still in place.  Wear your mask to protect others, wash your hands frequently, practice social distancing, and do what is necessary.  It will end sooner than we think.  Let’s continue in prayer.  Continue to walk by faith.  Continue to reach out to each other using social media and phones.  Christ is glorified.

It is an exciting time.

The post A door has opened to the Church appeared first on ICCEC.