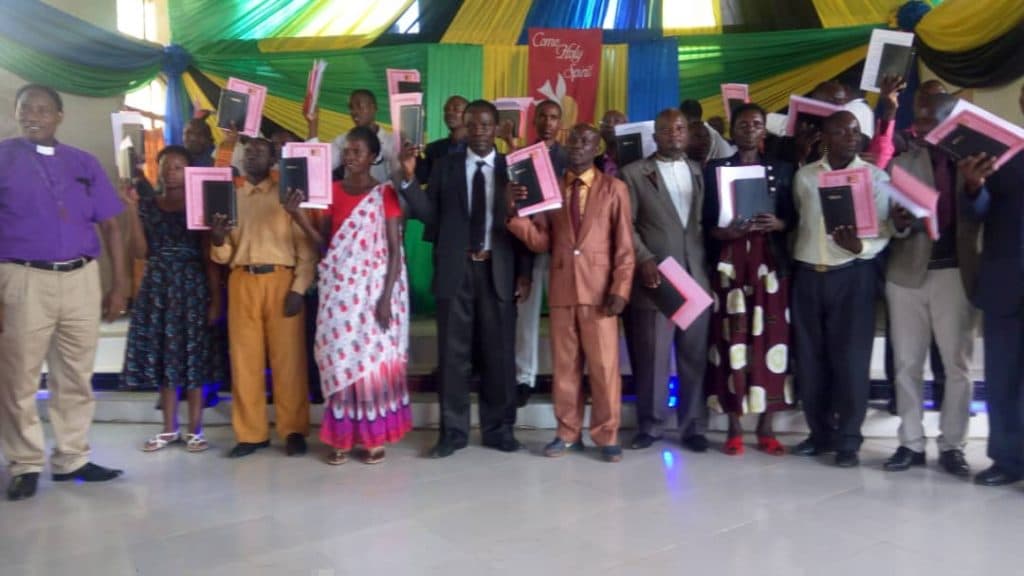 “Dear Co-Laborers in the vineyard, for the last two years we have been intensely getting involved in a church planting movement, last year in August myself and my Archdeacon Canon Joel Ng’wananogu were privileged to attend the training the “Evangelical school of church planting” in Wichita at the end of which we were both certified as Deans and allowed to engage into this movement in our churches and beyond.
In February from 19th-23rd 2019, we held our first Evangel school in my Diocese with 22 young men and women who felt the calling of God in their lives to go out and take the enemy occupied territories and bring harvests to the Lord of Harvests ,we trained them for 5 days at the end of the training on Sunday the 24th we commissioned them to go the commissioning service was held at the Cathedral , we gave them new Bibles and certificates and encouraged them to go in the power of the Holy Ghost and the Lord was going to be with them, in compliance with the guidance by TUMI ( The Evangel school section) we sent ten teams ( two by two), to the glory of God as I write now 6 new churches have been planted our target is to plant 10 churches within six months with these church planters and after six months they will move ahead and plant more churches in different locations, in mid August we are intending to hold another school for 5 days with 100 church planters then release them.
I send you some photos showing some of these events, I believe you will be encouraged to join this movement and be aggressive in both prayers and church planting.”

The post School of Church Planting appeared first on ICCEC.